Bert says the design is still popular in Australia, with demand for parts still taking up a fair bit of his time.

I'd say there would be around 100 or more GT500s with either the Rotax 582 or 912 still operating across the country. On top of that there would be around 150 of the single seat GT400s, and more than 300 of the earlier Quicksilver MX series. Forty years ago the then agent, who was based in Foster, was making a couple of MX kits a week, because while there was plenty of designs available, the QS range were always regarded as being one of the safest and predictable aircraft on the market,” he says. 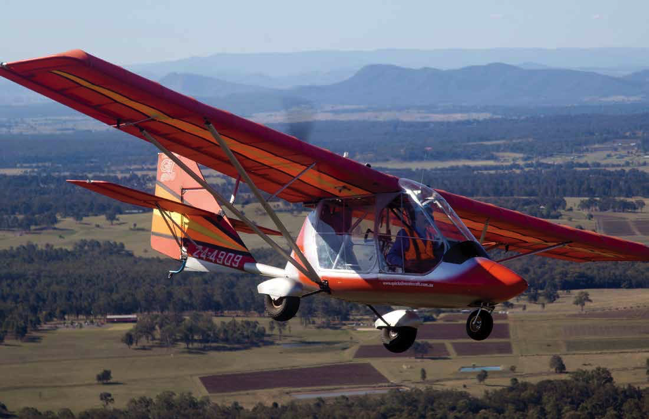 Flying is supposed to be fun. Mark Smith flies an aeroplane that has its roots in early LSAs, but is still a hoot in the air.

I ’ll admit there was a time in my ﬂying  career where I’d have looked at the Quicksilver GT 500 with a mixture of fear and loathing. Ignorance tends to create an animosity that only real world experience can change. But in the 1980s and 1990s I had bigger ﬁsh to ﬂy and so I continued my prejudice that was common in the divide between ultralights and so-called ‘real aeroplanes’.

I regret that now because if I’d have just accepted the challenge and got to know an aeroplane like the Quicksilver GT 500 I’d have had a whole realm of aviation open up 20 years earlier than it has. Thankfully I’ve grown up, become less judgemental, and have become eager to enjoy all aspects of light sport aircraft flying.

In the main, Quicksilver pilots are recreational pilots who just want to have some ‘short range’ fun, and usually Quicksilver pilots have a Cessna or similar stashed in the same hangar for their long range flying. Although the QS range is primarily recreational, the GT500 and the Sport 2S SLSA models are LSA certified and can be used for training.

It’s very old school in many ways, with simplicity and strength, but that’s the joy of flying in the recreational sector where the experience of simply being in the air is enough. The view with no engine gives any pilot the best seat in the house, while the construction makes maintenance a breeze. The whole QS range has not changed much over the years, as the saying goes “if it ain’t broke, don’t fix it”.

Flying a Quicksilver is fun, which is what any recreation is all about. Given it’s an aeroplane that was fully certified by the FAA it’s also safe. That has to be why the design has been so popular and why so many are still flying across the globe.

The Quicksilver legend lives on. 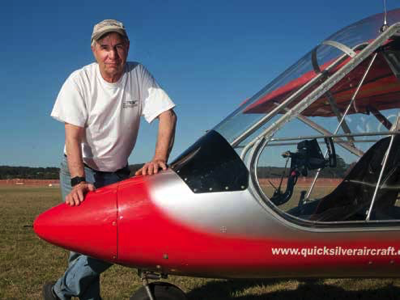 Bert Moonen, the Australian agent for Quicksilver, owns the aircraft I’m lucky enough to fly. It’s an original GT 500 with the addition of perspex doors that replace the original fabric and clear plastic, and was built in 2009.

The GT 500 debuted in 1990 at the Sun n Fun fly-in held annually in Florida. Tom Price and Dave Cronk, two of the ultralight/lightplane industry’s most expe- rienced engineers and designers, created the aircraft as a follow on from the single seat GT 400.

The concept was to offer an ultralight that gave traditional GA pilots the same feel as a heavier conventional aircraft, which explains the large yoke in place of the more common control stick usually found on LSA from that era. It also boasts elevator trim and three stage flaps.

It’s unusual to see a tricycle-geared aeroplane sitting with its nose high in the air waiting to fly, but with a pusher engine it’s the weight of the pilot that puts the nose gear on the ground. Climbing in is easy with the yoke full forward and the visibility is outstanding once enthroned in the nose. I’ve always enjoyed flying pushers because the view forward, without an engine or propeller reminds me of a glider. 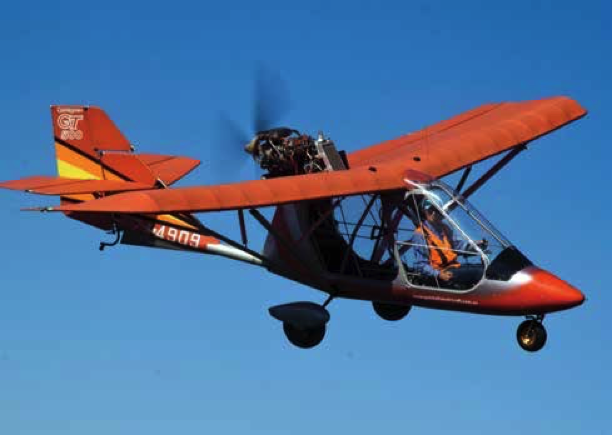 An 80hp Rotax provides the push and being mounted up the back produces a very different audio note. Being a trike means taxying is easy and in no time we were lined up, ready to blast off.

Full power and it pretty well leaps off the ground and I found myself throttling back to keep the climb angle sensible. Straight away it is obvious rudder and ailerons are quite heavy while elevator is quite light. The large yoke is needed to provide the heft required to move those big ailerons. 50kts seemed to fit the bill in climb so that’s where we kept it.

Cruise was set at 4500rpm and settled at about 70kts, with solid stability in all three axis. The heavy ailerons make it a two handed exercise to roll in a steep turn from left to right and back again, with rudder input needed to counter the adverse yaw. On the whole though, it’s not unpleasant to fly in any way.

Pulling down two stages of flap and pulling the power back saw 45kts appear on the ASI and it remained stable, though the control forces lightened considerably as is to be expected. Full flap stall speed (30 degrees of flap) is 36kts.

We entered the circuit on downwind at 70kts, popped a stage of flap on base as the power came back and dropped the rest of the flaps on finals, keeping some power on. Like all draggy LSA the Quicksilver loses speed quickly and a high approach to keep some energy seems to work best, knowing once the nose comes up and the power goes to idle it’s going to stop flying pretty quickly. With such a slow touchdown speed it’s an easy aeroplane to land, though given how low it is to the ground it’s a good idea to spend a bit of time just sitting and looking at the sight picture before the first flight. The flaps are definitely there more for show and the rumour is that the flaps (along with the yoke) were only added to keep traditional GA pilots happy, though I imagine they’d help a bit in shorter field ops. 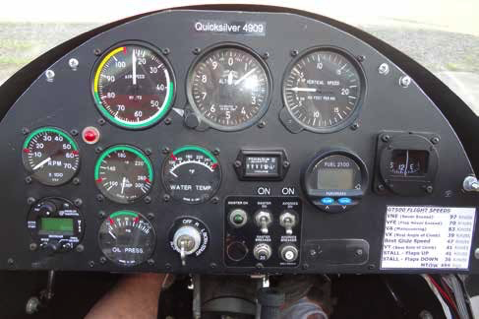